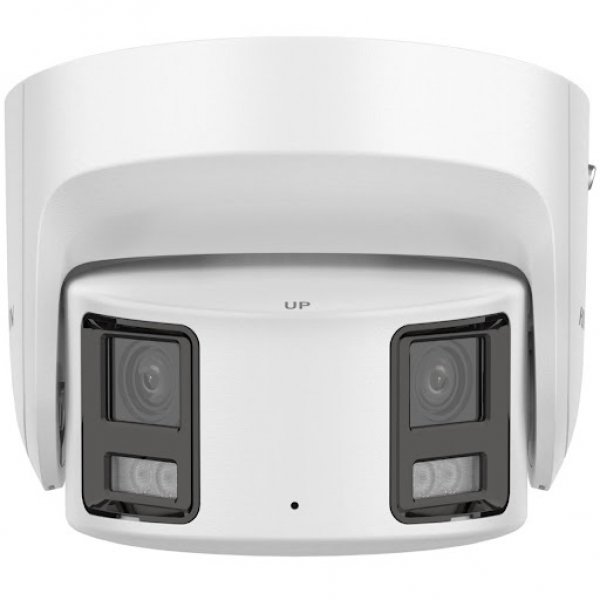 The DS-2CD2387G2P-LSU/SL is a panoramic camera from Hikvision and has 2x 4MP lenses which together give a 4K 180 degree image without the sides giving a convex distorted image.

This 180 degree 8MP (4K) turret / dome camera also gives color images in the dark by clever use of white light! The camera has a built-in microphone, speaker and sensor that can illuminate the scene via white light in the absence of light. This combination allows the camera to provide a color image 24 hours a day! The visible white light also has the advantage of making security visible, allowing unwanted visitors to clearly see that the premises are secured!

This camera can distinguish faces and vehicles from other movements so you will receive fewer false motion alerts.
This camera with two lenses of 4mm puts both images side by side to create a panoramic image of 180 degrees which gives no distortion on the sides of the image.
Since this is a single camera software-wise, you can also connect this camera to an NVR with a built-in PoE switch.

*NOTE: If you want to combine this camera with a Hikvision Network Video Recorder (NVR), you need a so-called I series because of the resolution that this camera gives. See below at: "complete your order". 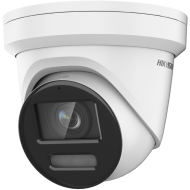 New -25 %
Hikvision DS-2CD2387G2-LU(C) - 8 Megapixel 4K - ColorVu - Turret - Audio - Microfoon - Wit
The Hikvision DS-2CD2387G2-LU(C) IP camera produces color video images day and night! Thanks to its light-sensitive sensor and white LED lighting, thi..
247.89€ 329.75€
Ex Tax:247.89€
Add to Cart
Add to Wish List Compare this Product
Quote request
Installation
Easy to install
Control room
Possible ( not required )
Official partner
In Hikvision
Hikvision Alarm System uses cookies to improve the user experience. We have completely anonymized the cookies from Google Analytics and therefore we are allowed to place them without permission. You can read more about this on our Privacy Page.